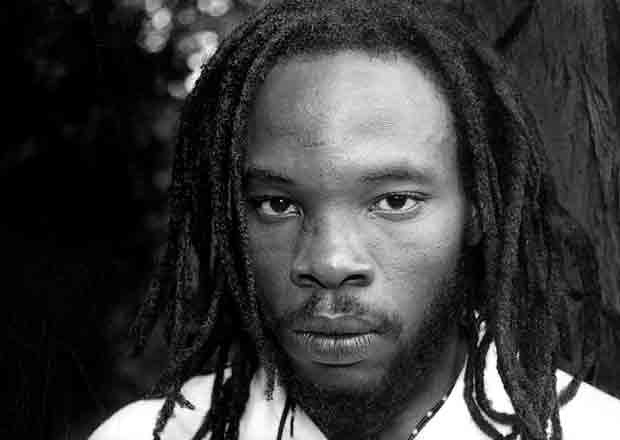 After more than a decade of reggae classics, Bushman returns with his new album, Bushman Sings the Bush Doctor, on which he sings a collection of Peter Tosh songs. Lily Mercer spoke to him about Bob Marley, Jamaica and how a game of football changed his life…

LM. Your new album, Bushman Sings The Bush Doctor, is a tribute to Peter Tosh. What is it about his music that inspires you?
B. He’s a man who exercises freedom of speech. I think music is a platform, which gives you the right to express yourself.

LM. Has he always been an inspiration?
B. He’s always been around because growing up with a Rasta man dad; these are some of the songs that I heard in my youth. But the awareness really came to me when I did Lighthouse. Omar Davis, the finance minister of Jamaica got in touch and told me I reminded him so much of Peter Tosh. Then his bredrins brought Lighthouse to me. This was the first song I released that wasn’t written by me. But the song was speaking to me as if I was Peter. Being the Bushman, the medicine man made Peter a forefather that had passed before me through the music and I brought the spirit to reality. Rastafari.

LM. When you first were given the name Bushman, you took offence, but it’s interesting that Tosh name his album Bush Doctor.
B. Definitely and then bushman in Africa means medicine man too. The way I see music, we should use it to exercise freedom of speech, it’s a redemption sound. I have a chance to do music, to speak for a nation of people. Having a platform, I think I should do it positively.

LM. On tracks like Gangsta Life, you observe the negatives of rude boy life. Is it important to you to promote the positive side of life in Jamaica?
B. It’s not just for my country. I don’t see colour, I don’t see race, I don’t see class, I just see a nation of people unaware of what is happening to them because of mental slavery. We go to 9 to 5’s daily having only enough to go to the supermarket and pay the bills then having to go back to work the next day. People are busy searching for food for the belly, but the people searching for food for the mind really grasp what you are saying.

LM. Peter Tosh stood for similar values. Are you happy to step into his footsteps?
B. Very happy, I see myself picking up from where he left off. I have my own sound but we stand for the same thing. It’s something in common. I was at the Cannabis Cup signing some autographs and selling CDs, people came up to me and said, “Bushman, you sound so close to Peter, you really bring back his vibe. You sure you’re not related to him? You could be his son and you don’t know.” I just say, look how short I am and look how tall Peter was.

LM. Why do you feel that Tosh is often overlooked in favour of Bob Marley?
B. I don’t know. I was reading this book that said it was an issue of skin colour between Bob and Peter. Bob was with a prominent recording and distributing company with Chris Blackwell, who had a good idea of the industry through working with rock bands before. He brought bob Marley in through that network. Rock bands have long hair and bang drums, Bob Marley came with long hair and music with banging drums, it was the same attitude to market to people. Bob was more established than Peter, that’s my opinion. True say, Bob Marley was out there more than Peter, I wouldn’t think it was about skin colour. I think that Peter also deserves to be established. Chris Blackwell had Bob as his foremost thing. When they did the music and prepared to move on the road and present it to the people, Bunny Wailer said, ‘you’re not taking any iron bird’ (Jamaican term for a plane). I don’t know what his opposition was but Bob Marley went with the band.

LM. How did you select the Tosh songs you wanted to sing?
B. I played a great role in choosing the songs that went onto the album, but it was not all on me. Some of the songs I wanted to sing I couldn’t. I wanted to do Nuclear War, which I think is significant in this time and an extra song called The Day the Dollar Die, which is also significant. When I heard Mawga Dog, I was excited to do that song. Bumbaclot was one of them songs that people would be scared to do, but it’s on the album. It’s not on the CD, it’s just for digital download.

LM. You developed an interest in music from a very young age. Was there any other career that you were tempted by or did you always want to sing?
B. I thought of boxing at one time. If I wasn’t a singer, I think I would box but from day one I loved singing. Teachers would send me to the principal’s office because they would come in and I would be beating on the desk making up lyrics. It’s been a thing from a tender age.

LM. You still live in your hometown of St. Thomas. Does it keep you grounded?
B. I believe I should give back to the community and the town that I’m from. Currently we’re doing this project, football in style. It’s a February project for Black History Month to do essays in the school and play football. I try and get artists to come and play football with the kids then perform after. We’re looking at a ten-year spot. These are the goals I’m aiming at; this is why I really stay rooted in the community. Plus I like the wild, I like secluded places, I like the forest. It’s an inspiration to be in touch with Jamaica.

LM. At the start of your career, you would regularly hitchhike to Kingston. Were you determined to make it in the reggae industry?
B. Yes, I used to pick limes and bring them to Kingston. I used to give them to this woman that used to sell juice and bread and butter to get some lunch, sometimes I’d have to share it with my bredrins. What I was doing was insane, but I’m not a quitter. You just have to be focused and do what you know you’ve got to do. If you don’t believe in yourself, no one’s gonna believe in you.

LM. Your career began after you lost a game of football and offered to sing for Steely and Clevie.
B. They thought I was a great football player, but I told them I didn’t go to the studio to play football, I came to sing. Steely’s a man who likes to be centre stage, he was like, ‘Roundhead, this boy says he can sing’. Roundhead from Monster Shock said, ‘Steely, him a good artist man’ so I said, ‘you wanna hear me sing?’ Steely told me to sing a tune, so I sang and he was like, ‘this singer sounds good you know. Sing another song.’ At the end he said, ‘You passed the test yout, Roundhead bring him up my studio Wednesday’.

LM. Would you say you’re glad you lost that game of football?
B. I’m very glad, here I am today.