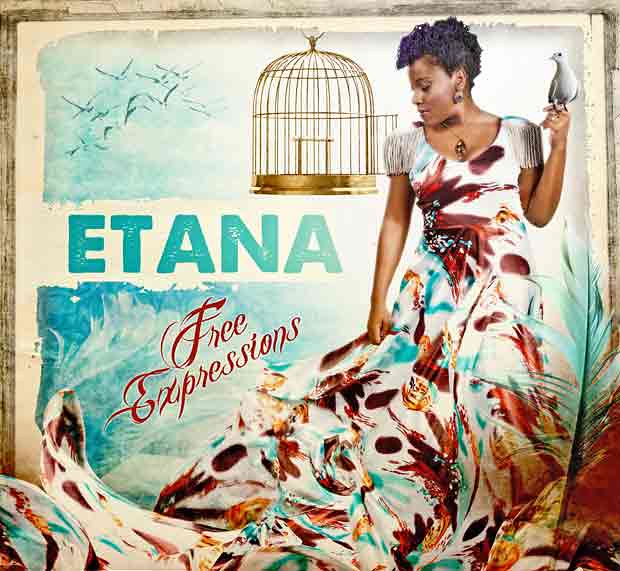 Following the success of her debut album The Strong One, Jamaican songstress Etana returns with Free Expression. Lily Mercer spoke to her about the role of women in reggae, oversexed lyrics and Jamaica…

LM. You wrote the majority of your new album, Free Expression. Was this an extra personal project for you?
E. Yes, this time I wasn’t too concerned about what would be said negatively about it. There was no, ‘you can’t do this, you can’t do that’, I just did it to express myself.

LM. Free is a very emotional song for you. How did it come about?
E. When I wrote Free, I was going through a very rough patch. There were changes in management. Plus there was a turf war in Hannah Town and my family and relatives were right in the middle. It was really hard watching my cousins go through the stress of not knowing if they could go home. I remember walking into the studio when the track was playing and it came to me in a few minutes.

LM. You moved to Miami as a child and returned to Jamaica as an adult. How did your time in the US impact on your music?
E. I learned a lot growing up there, going to school, going to work and joining a girl band; I learnt a whole heap of lessons. It helped me make up my mind as to where I wanted to be.

LM. You walked away from mainstream US success on a video shoot for a single by the girl band. What caused you to make that decision then?
E. It was a build up. Nobody listened; it was all about what they wanted me to do. A cameraman can put a camera anywhere on your body while you’re doing a video shoot, because you gave permission by being in the video. I’d rather just do it my way, without being so exposed.

LM. Did this inspire you to set up your record company?
E. Being on the road with Richie Spice made me realise a lot about women in the reggae industry and how they are viewed. I really wanted to change that or set an example. After coming back to Jamaica I realised that I can wear my Afro out and be a woman with people appreciating me as I am.

LM. You’ve been called the most prolific female reggae artist working today. Did you set out to change the game?
E. I realised that most of the females when I came back to Jamaica would be on stage and the first lyrics would be about their vagina. It was just sexual stuff, as if that’s all a woman is about. One time I wrote a song, a sexual song and this little girl saw me and said, “I know your song!” and was so excited she recited it. I was embarrassed that I introduced her to that at only five years old. I figured if she could know a song like that, she could learn other songs so I started to write them.

LM. Do you feel that you’ve made it easier for people to follow in your footsteps?
E. Yes, in Jamaica or even when I go to New York or D.C. on tour, I see women proud of being their selves. Some women were a little bit shy but now things have changed and women are becoming more involved in school and music programs.

LM. Do you think there’s more room for women in reggae?
E. For sure. The respect level for women has gone up. There are chauvinistic men in the industry who still want to give women a hard time, but it has changed a whole lot. Women are no longer considered a warm up act to a headline performance. Women have stopped talking sex all the time. There’s now discussion about the things we face as women and I’m happy. There are new females coming up now too. There’s a major show in Jamaica called Sting and before there were only 2 or 3 females on one flyer, now there’s 10.

LM. How important is it for women to know their own strength and use it positively?
E. A woman can make a whole household or nation either happy or unhappy; we can build a nation or break it down. It’s important for us to know that we have a nation to hold and to build. Even in the bible, the man is the head of a household, but little girls and boys would know nothing about love or care if it wasn’t for a woman. He may be the head of the house but the woman is also the backbone of it all. Without the woman it wouldn’t be possible.

LM. You went back to Jamaica to set up an Internet café before being snapped up by Fifth Element. Do you feel that it is fate that led you into your career?
E. When I was about 17 my cousin died and I had a vision. He came and asked me to come back to Jamaica and I said ‘why would I come to Jamaica?’ Later I said, ‘if its supposed to be that I go back to Jamaica, then let it be so’. The bible that was on my bed had a light cover and it rolled open to Ephesians 5. If anyone were to read that book Ephesians 5, they would realise why I picked up my bag and went to Jamaica.

LM. Through your music, you address many social issues in Jamaica. Do you feel responsibility to expose these issues to the world?
E. Of course, whether you like it or not as an artist you are considered a role model. You find that younger people or even older people might look to you for strength and you do have a responsibility to share your education and experiences so yes, everyone has a responsibility as an artist.