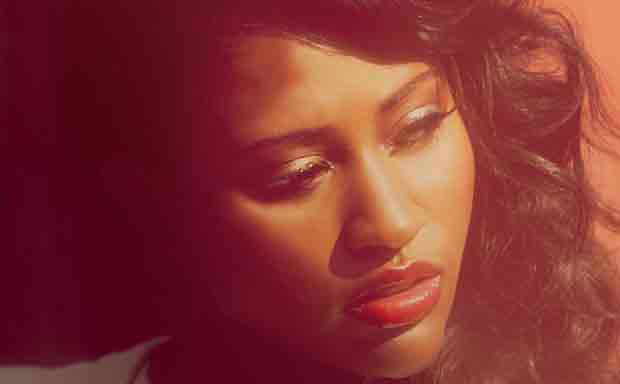 Following the success of her Grammy nominated debut album, Fearless, Jazmine Sullivan returns with Love Me Back. Lily Mercer spoke to Jazmine about being compared to Lauryn Hill, touring with Mary J Blige and how her hometown, Philadelphia inspired her music.

LM. Your debut album, Fearless, debuted at No.1 in the Billboard R’n’B album chart. Were you expecting such recognition so early on in your career?
JS. I really didn’t. I always hoped I would do well, but I knew the obstacles I was facing. My music was very different from everybody else’s and so was I, so I didn’t know if people would be accepting. It was a surprise when they were.

LM. You’re from Philadelphia, a city with a rich musical history. How important was your hometown in developing your musical style?
JS. I started performing when I was about 12 or 13 at this place called The Black Lily. It was a place for women, to give them a chance to showcase their talent. When I was there I saw wonderful artists doing good music and gained a love for performing, especially with a live band. It was a blessing, to be that young and to be around that much talent.

LM. Do you like to have control over your visual branding?
JS. Yeah, I’m very instrumental in the musical aspect of my career, but I’m just starting to get into things like my videos, wardrobe and how I want to be seen. I feel like I’m growing as an artist and I want to be more involved with different parts.

LM. Is it important for you to be involved with a track from start to finish?
JS. Yes, I write all my songs and I love the fact that people are hearing what I have to say and that they relate to me in that way. One of my favourite things is being able to sing my old songs and people know my lyrics. I love it when people write to me telling me that they’ve been through the same thing or I helped them through whatever they’re going through in their life with my lyrics.

LM. How much of your music is influenced by your mood at the time?
JS. A lot, I go through some things and without thinking about it, I write about it. Not even right after it, it may come months later, but I realise somewhere down the line. It’s therapeutic for me to express myself through my music.

LM. Would you say that Love Me Back has a more mature sound than Fearless?
JS. I feel that I’ve grown up a little bit on this album. I feel like you still hear different genres of music and different styles but I’ve honed my R&B sound on this album.

LM. You just finished a tour with Mary J Blige. How do you respond to the comparisons between you to Mary?
JS. I’m honoured of course. Mary is one of those artists that has been around for so long and stayed relevant for so long. She’s touched the hearts of so many people, especially women. That’s what I wanna do and hopefully what I am doing, so it’s great to be compared. It was a privilege to work with her. I remember going to her show in Philly with a friend of mine when I was younger. One thing I really remember and admire is that she let go in her performance and she bared it all for everybody to see. She was so honest and open with her emotions and she let people in, in a way that I haven’t seen an artist let anybody in. It was almost like she was at home talking to you and she was talking about problems that she had and she was crying to her friend. I loved that and I wanted to capture that in my music and be able to talk to people as if we were friends.

LM. You’ve also been compared to Lauryn Hill, how do you feel about those comments?
JS. That’s also an honour. She was the best of our time so to be compared to her is great. But I want people to see me as my own artist and that’s why I’m really working hard on being vocal about how I wanna be seen and how I want things done, so people will separate me from the people they have compared me to.

LM. You had a record deal with Jive at 16 and were offered your first deal at 11. Do you feel that you and your music benefited from you not signing at such a young age?
JS. I do. I’m so grateful because so many top stars came out then and did well but we never heard from them again. I had some time to bake in the oven and learn who I was. I’m still learning who I am, but I feel like that was a good time for me to take a step out.

LM. Your recently completed your film debut in Red Tails. Is acting something you’d like to do more of in future?
JS. I enjoyed doing Red Tails, it was definitely a challenge for me and I love things that challenge me. Doing a film was not something I had ever done before, but I don’t know if I love acting and I only want to do things that I love. I’m not saying that I won’t one day love it, but I’m focused on my music and I’m really in love with making music and writing music.

LM. You performed in London in 2008, can we expect you to return anytime soon?
JS. I would love to. I love London. I was just watching the performance I did at the Jazz Café. There was just so much love and so much energy in the room. I can’t wait to come back.

LM. Are there any musicians in the UK you’d like to work with?
JS. I do have a label mate from over there, Marsha (of Floetry). I haven’t really said anything about it but I probably would work with her and I would love to. We’ve known each other for a long time. It would be like being back at The Black Lily again.