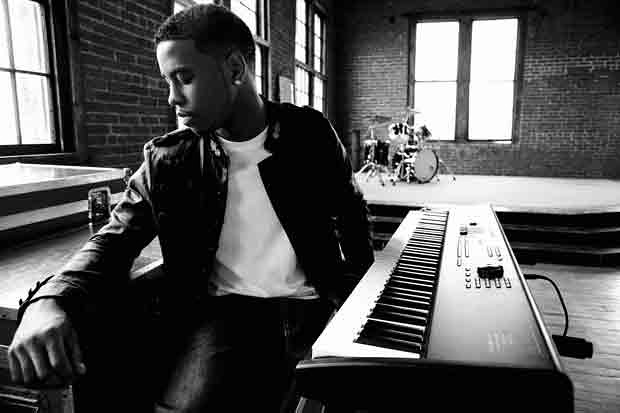 Following the success of Birthday Sex, Jeremih returns with Down On Me featuring 50 Cent. He spoke to Lily Mercer about London girls, explicit lyrics and baby-making songs…

LM. How’s the tour going?
J. It’s been good. We were in Belgium and Amsterdam then flew into London yesterday. I love London, I wouldn’t mind recording an album out here.

LM. Are you looking forward to performing?
J. Definitely. Every time I come out here there’s a lot of love. Not that there isn’t in the States, but I like being in a new territory and seeing how far my music travels. It’s still amazing to me.

LM. Your new track Down On Me features 50 Cent. How did that come about?
J. G-Unit reached out with Lloyd Banks. I’m on his new single, I Don’t Deserve You. It’s crazy because I wrote Down On Me a long time ago and I wrote, ‘let’s go and take 9 shots, we’ll just call it 50’ with no intuition that he was going to be on the song. So it’s ironic that he ended up hearing that record and embraced it.

LM. What’s 50 Cent like?
J. He’s a genius. From the outside looking in people might view him as someone that bullies other artists and ends careers. But every time I’ve spoken with him, I’ve learned something. He’s just one of those people that everybody should know. He’s an artist and a friend, it was great to be able to do a record with him. I’ve always been a 50 Cent fan, then I got signed two years ago and now I can call him if I need him. He offers guidance and advises me. He’s a cool dude, I don’t fear him like a lot of people do.

LM. He definitely has a freaky side so he’s well suited to the track.
J. I can’t say I’m too far off from that myself so obviously that’s why our music is working right now. We actually have another record together called 5 Senses. There’s a version on my new album, All About You, without him. But he put two 16s on it and people like it.

LM. You come across as a gentlemen. Do you hide your freaky side?
J. Just because you’re a freak doesn’t mean you have to be a freak in the streets. But I’m sure everybody has a little freaky side to them, you just have to let it out.

LM. Your first album, Jeremih is listed as explicit, but All About You isn’t, why is that?
J. My first album didn’t have to be advised either. Albums are parental advised because of lyrics, but when I write I’m not vulgar. I write metaphorically and try not to make it sound raunchy or corny but to relay a message that might be about sex. I can do baby-making songs without having to say ass or a titty. But the lack of parental advisory could also be about growth. Some songs on my new album have a lot more depth and meaning to them.

LM. Do you try out lines on girls through sexting before you put them in your lyrics?
J. I’ve done that, I can’t say I haven’t. But that’s not instrumental to me writing my songs. I like to paint pictures lyrically, I want you to be able to see what I’m talking about. Like in Down On Me when I say, ‘slowly start to poppin it, something like my wrist cause everybody got to watching it’, stuff like that is how I write. I try to make you think about what I said if you missed it.

LM. You’re a rapper as well as a singer. When can we expect your mixtape?
J. Next month, I’ll probably drop it at the end of March. Expect the unexpected; this is another side of me that I wanna show to my fans. Before I am a singer I’m a musician, I’m a producer and I like to use my voice as an instrument.

LM. You’re from Chicago, which has an amazing music scene, especially for rap and spoken word. Did that influence your style of writing?
J. Yeah, Chicago is a talented city. Some of the greatest came out of there: the king of RnB, R. Kelly, Kanye, Lupe, Common, Twista. These are the people that have stood out in the world as notary artists. Since R. Kelly there hasn’t been a male RnB singer out of Chicago that broke out of being local and able to travel over here to rock shows. I feel honoured to be that guy but I have a long way to go to catch up with R Kelly.

LM. Was 12 Play an influential album for you?
J. Oh yeah. I’ve listened to R Kelly my whole life. Maybe it’s because I’m from Chicago but every time he’s dropped an album, it’s just been one of those records. Not many people were making records that you could listen to entirely in the bedroom and not have to press skip at all. I like to listen to music when I’m in the bedroom with my woman and he made albums that you could keep going and going. One day I’d like to put out an album that’s dedicated straight for the bedroom. All About You has those records, but there’s some more mature tracks on there that might blow the mood and make you think about some other things.

LM. What did you think about the Keenan Cahill video when he covered Down On Me?
J. It aired on Chelsea Lately when I was in the studio recording. I’m in front of the mic recording and Mick who I record with was like, ‘Yo, you gotta come out here’. I was like ‘No, I wanna finish this song. What are you doing?’ and said, ‘Trust me, you’re gonna wanna see this’ and made me come out. The funny thing is, the record wasn’t doing too well at the time and people didn’t even really know I’d come out with another album. Once it aired on her show, it raised awareness because it wasn’t a crowd that was hip to me but obviously they knew who 50 Cent was. I did some research on who Keenan Cahill was and he was just lip-synching to the biggest records at the time and getting millions of hits. We put Birthday Sex on YouTube two years ago and it’s still on 9 million views, which is a lot of hits. That’s for a Number 1 song. This little dude put out a video to Down On Me three months ago and now it’s over 20 million. That’s how big his following is. I thank him because he really made people aware of my song and obviously gave people something to look at on YouTube and laugh at. That’s the kind of genius moves that 50 Cent makes. He could have done any song he wanted to because he hopped on a lot of tracks around the same time he did Down On Me. He could have done a joint with Lloyd or Bobby V but that helped spark it up to another level and now that record’s number 5 in the charts.

LM. Did you feel left out when you saw the video?
J. No. I’d have felt better if I got to come in and do a little bit at the end. But I was hoping that once people saw the video, they’d look up who did the song, which they did. In fact, you know when they play videos on screens around the club? I’ve seen clubs go back and forth between my video and the Keenan Cahill video as if that’s the official version. I don’t mind it because it’s funny.

LM. You also collaborated with Ludacris on I Like.
J. Yeah, that was my first single from All About You. Originally he wasn’t on there, it was me on two verses but L.A. Reid chose that as first single as a good follow up from Mr Birthday Sex. When I play it, I get the same response that I get from Birthday Sex; it’s a bedroom record. I’ve been a fan of Ludacris for years, since he came out with the ‘fro and the animated videos. He really stood out as an artist and being able to work with him was great.

LM. Are you into London girls?
J. I love London women. They are the shit, from the accent to the style. I think I’m just a sucker for the accent.

LM. What should a girl do to get your attention?
J. Be herself. I’m pretty good at reading vibes with women in the first five minutes of conversation. I think women should be themselves. I’m myself, so be yourself and we can be ourselves together.