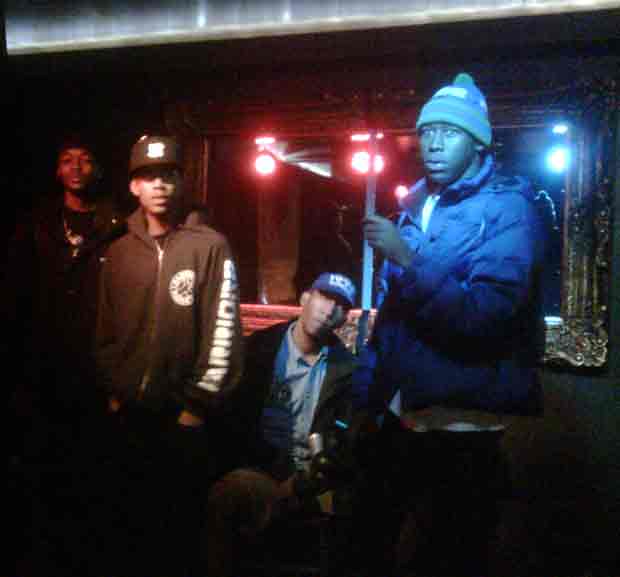 Odd Future performed on Friday night in my old stomping ground, Stoke Newington. Tickets for the show sold out in one hour so it was a mix of industry heads, super fans and people with fast Internet connections.

I was lucky enough to sneak into sound check and watched Tyler, the Creator, Hodgy Beats, Left Brain and Mike G as they prepared for their first London gig. I had a chat with Tyler about photography, London’s diverse residents and the style of London girls V L.A. girls. London girls won just in case you were wondering, but I think my leopard print trousers may have swayed that.

When Odd Future graced the stage a little after 1am, the performance was just as crazy as it was expected to be. There was the obligatory mosh-pit session and one drunken fan who repeatedly tried to climb on stage only to be picked up and thrown off by Odd Future. He forced his way onstage at the end only to be introduced to the audience by Hodgy, who led the crowd in chanting his name, “Sahoe.” At this point he was bleeding from his mouth and temple. It was one of the best UK gigs I’ve ever been to but I spent the rest of the weekend deeply regretting that I didn’t take a camera with me. Luckily I took a few pictures on my phone. French and Sandwitches were probably the highlights of the night, but Tyler rapping Blow to me was a pretty terrifying moment. If you’ve heard the lyrics you’ll understand why. Shout out to daveyboysmith82 for the YouTube video, he managed to capture all of the drama involving Sahoe.

If you haven’t already, head to oddfuture.com to download Mellowhype’s Blackened White.