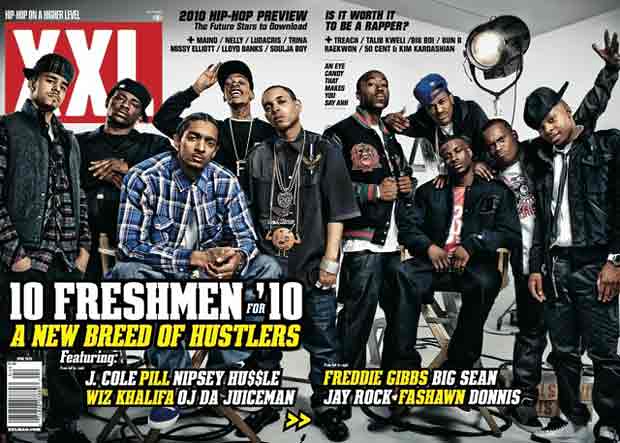 XXL’s Freshmen ‘11 have been leaked, but have they made the right choices?

I have to agree on some of the names, Kendrick Lamar for one, Big K.R.I.T is another, but the majority leaves me a little confused. My biggest criticism is Yelawolf’s position. Dude was on last month’s cover and pretty much everyone knows who he is thanks to the Shady signing. Similarly, Meek Mill will soon be a similar position thanks to the Rozay co-sign. I know the list is simply XXL’s pick of who’s got next, but there are definitely more than 10 good up and comers in the game. When everyone knew who he was last year, including Yelawolf seems to me like a waste of space.

Mac Miller and Diggy have the teen support and if you’re into the Drakes and J. Coles of the world, Run’s son doesn’t sound too bad. He ain’t saying nothing new, but if he’s that rehearsed at this stage, imagine where he could be in five years. Mac Miller hasn’t got the greatest lyrical content, but he definitely has a following. Lil B is an artist that definitely has a following. The Based God is like the little brother I never met, he makes me laugh so he can do whatever the fuck he likes and I’ll still back him. If you can listen to one of his songs without cracking a smile, you have no soul. I liked French Montana’s track with Curren$y, but he didn’t impress me enough to look up his other music, so I’m indifferent to him. I haven’t listened to CyHi the Prince apart from in the BET cypher and I’m not in any rush to start. Lil Twist, I will not even comment on because, just no.

Now let’s get into who should be involved in this. My interpretation is based on personal preference and who I would like to see grace the cover. Obviously I’m gonna have to say Danny Brown because he’s the fucking greatest right now, but XXL have only recently started posting his tracks on the website so they’ll have to catch up first. With his poetic lyrics and original sound, Stalley should also be on here. He’s had a great deal of support from XXL so I guess they may have felt that he hasn’t had enough releases. Homeboy Sandman has been building a following for years now but just as I started to think he might not break through, he did. An article on him in XXL over the summer shows he’s on their radar. He also recently featured on a track with two former Freshmen, Blu and Freddie Gibbs.

Though Kendrick is present, his fellow Black Hippy, ScHoolboy Q wouldn’t have been a bad choice as Setbacks is already one of my favourite releases of 2011. The remaining group member, Ab-Soul is also a good choice, though he may not have put in enough work yet. Reks definitely should have been included in the Freshmen list by now. Smoke DZA is another artist I think should be counted as his work with Ski Beatz and the DD172 crew is always a nice listen, while Dom Kennedy, Chip Tha Ripper and Curt@ins also deserve a mention. Finally, I can’t think of a rap group that has appeared on the Freshmen cover, but L.E.P/Bogus Boys would have also been a nice addition.

Unfortunately the group of artists I have named are probably too talented without enough of a mainstream following for XXL. In today’s age, some consider the magazine to be slightly prehistoric in the world of Hip Hop journalism. Their role as a mainstream publication means they are likely to sway more towards the next Lil Wayne than the next Talib Kweli, but they could have done more to mix it up. It’s no well-guarded secret that the Freshmen list is often made up of behind the scenes deals, labels have been known to pay in order to get their artists included in the countdown. But occasionally the magazine get it right, as seen from Blu, Freddie Gibbs, Curren$y and Jay Rock’s appearances.

But what is the point of the list anyway? Many Hip Hop fans will have already sought out these artists and memorized their back catalogue. We no longer need the press to tell us who the future stars are, we should already know who they are.