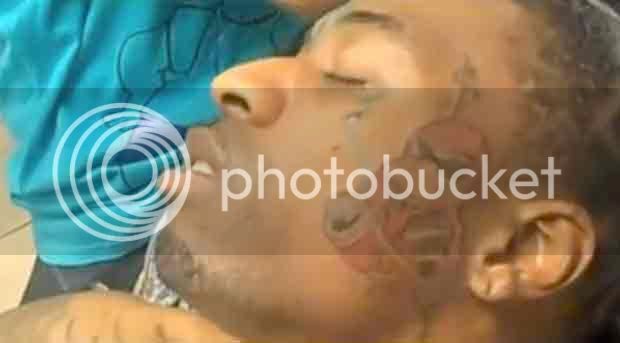 We know what you’re thinking, what in the name of Gucci Mane did this dude do to his face?!

Earlier in the week shocking pictures of Atlanta rapper Yung LA getting a tattoo hit the Internet. For many, a facial tattoo is enough to suggest that you have lost your mind, but Yung LA’s choice of a pink duck definitely took craziness to a whole new level.

Duct Tape Entertainment’s co-CEO, Alley Boy, has stated that Yung LA is not affiliated with the Atlanta record label. But now that he has a duck tattooed on his face, unsurprisingly Yung LA is standing by his membership. Speaking on these rumours, Yung LA said, “I can’t really go on what [Alley Boy] say ’cause he’s not the CEO of the label,” adding, “So he wasn’t around at the sit-down, when we did chop it up. I had my relationship with Big Bank Black, other cats, and people that I grew up with and they love me genuinely. That’s the relationship I had.” Imagine if you got the golden arches tattooed on your face, only to then be banned from every McDonalds in the country. The pain.

As if his feathered friend wasn’t causing enough problems, Yung LA has more on his plate as he attempts to get out of his former deal. Still signed to T.I.’s Grand Hustle Records, the rapper blamed “backwards” business practices as the reason for his desire to leave. He said, “Right now we’re actually fighting,” going on to say, “We got our lawyers going to war with them. They just tryin’ to free me out of the contract. They don’t wanna let me go, but they don’t want to work for me either.”